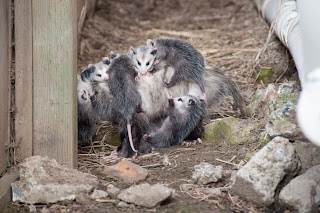 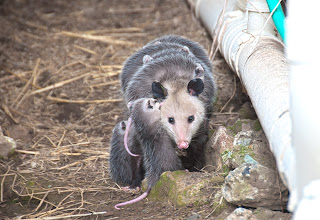 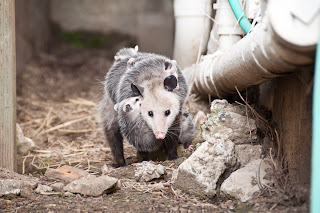 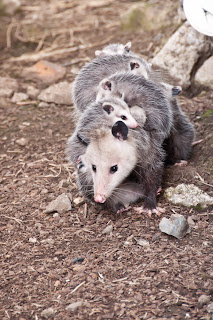 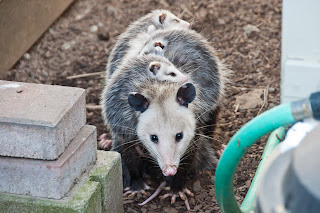 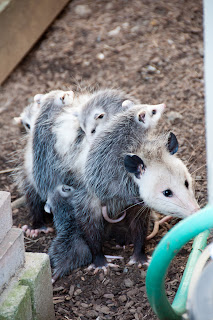 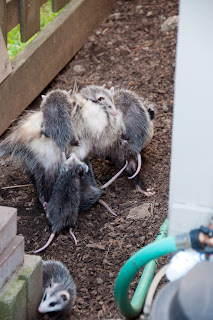 Some how the manage to get over the fence with most of her litter still on her.  However she left four behind for goners.  One made it through and caught up, one has now been taking away by Animal Control and the other two are lurking in my yard tormenting the chickens.  They are surprisingly tame, and are not scared.   They are pretty much blind and use a sort of chirp noise to locate each other.  Surprisingly, Animal Control said they would be rehabilitated and released.  I figured they would have just euthanized them.  Or maybe he was humoring me.  He did mention that he had a recent case where some chickens were lost to a hungry opossum.  Between this and the raccoon I saw in the yard a couple nights ago, maybe it's time to up the Yolk Tale Border Fence.
Posted by maxslug at 1:10 PM 2 comments:

Right? Well I hope so, cuz it's been a really long time since I've posted.

How are you? How's the brood? Here at Baker Ranch, we've had a busy summer and fall. There's been moulting, egg eating, and all kinds of terrible that I haven't had the heart to post about. However, it's fall, and the ladies have grown back their feathers and appear to be more or less on good behavior.

I promise I'll post something interesting in the next few weeks. Stay tuned.
Posted by Mrs. Baker at 3:30 PM 5 comments:

As promised, I thought I'd share about the wonderful world of chicken leisure activities. 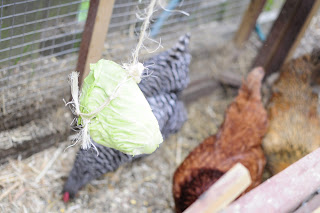 The ladies get bored from time to time just scratching the dirt and straw all over our yard, so it's important to provide outlets of entertainment, lest they remember that they make tasty snacks.

I've compiled a step-by-step guide to making a cabbage tether ball, that the chickens gleefully volley back and forth in the run, catching small mouthfuls with each peck.

Step 1: Get a medium head of cabbage (green or purple*), and slice it in half. 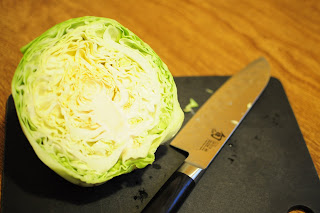 Step 2: Use a chopstick or other pointed object to pierce a hole in the cabbage. Alternately, Mr. Baker likes to drill though a whole cabbage using a long drill bit. 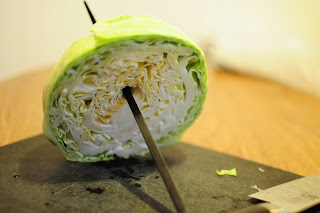 Step 3: You'll want to feed a string through the cabbage in order to tie it up. Shove a straw through the hole and create a passage through which you'll feed the string. 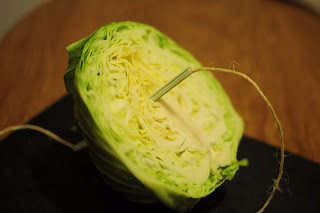 Remove the straw while keeping the string fed through, and tie the string around the cabbage, knotting the ends together. 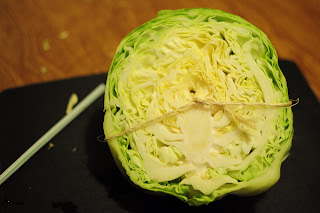 Step 4: Tie the cabbage up to the top of the chicken run, and get ready for hours of chicken amusement. 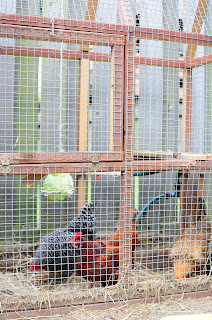 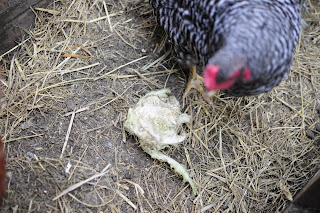 I'm happy to report that Garuda and R.E.D. have been getting along much better. 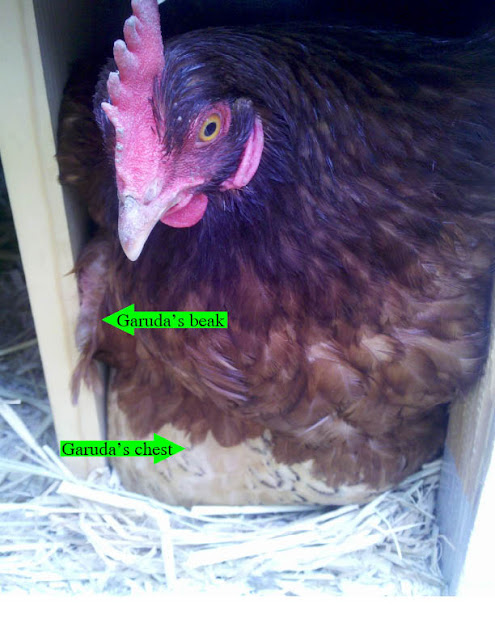 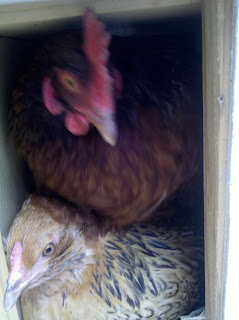 They seemed pretty comfy in the 10"x 10"x 10" nest box, and seemed unimpressed and completely disinterested in vacant nest box to their left. Cuddle puddle!
Posted by Mrs. Baker at 7:03 PM 2 comments:

Chickens make their own snacks 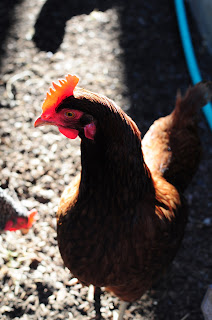 I have some disturbing news to report regarding egg production: It appears that the chickens have discovered that they create their own tasty treats.

Last month, Mr. Baker and I discovered that toward the beginning of the month that egg production was unusually spotty. Since Garuda started laying in April, we'd had especially consistent laying, with R.E.D. and Garuda coughing up just about an egg a day, and Checkers trailing closely behind. (As an aside, it appears that I track my girls' cycles more closely than my own...ahem.)

We theorized at length about the disrupted production. We'd seen an errant feather here or there. Were they starting their yearly molt we'd heard so much about? Surely not. Most of the literature clocks the molt to happen around fall/winter (at which time, we will surely submit photos to this contest).

Mr. Baker and I'd seen the chickens (well mostly Checkers, that troublemaker) rolling the eggs out of the nest from time to time, and thought little of it. Then, one terrible day, I walked out to the coop to find shards of egg shells in the run area with the ladies remorselessly smacking their beaks, braying for more treats. They'd discovered what we've known all along: they produce tasty snacks. Since then, we've employed some modest approaches to squelching their negative behavior.

I knew they were beyond most behavioral training and therapeutic techniques I'm familiar with in my day job (cognitive behavior therapy? solution-focused? electroshock??), so we looked to the internets for guidance where we discovered that they probably needed more protein and/or calcium. We'd recently bought our second bag of layer pellets, and apparently the ladies were not having the new brand, so Mr. Baker trekked across the greater bay area to find the preferred pellets. Since the hens have constant access to high-protein pellets and oyster shells for calcium, we tried adding some gourmet supplements to these staples. Long blogpost short, we essentially started spoiling the little brats to bribe them into saving their eggs for us. 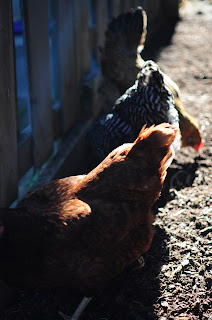 Their new, improved higher-protein diets consist of the following delicacies:

Alas, the remainder of the month was spotty still (though sixty-five eggs in May is nothing to sniff at). Mr. Baker is a Negative Nancy, insisting that every day we get less than full production is a day of chicken cannibalism. I'm more optimistic that their slowed production is simply in protest to the cold weather (clearly summer has forgotten about San Francisco this year). At any rate, humans have still done far more disturbing things with the dregs of the reproductive process, as seen here.
Posted by Mrs. Baker at 10:03 AM 1 comment: 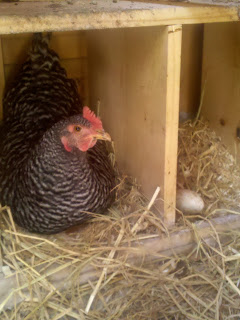 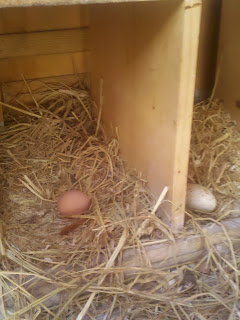 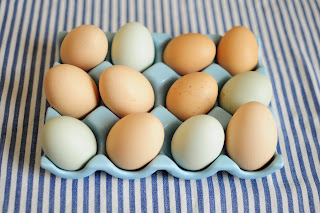 That pretty much sums it up. Please check out our current egg production stats on the right side of the page. These girls are busy!
Posted by Mrs. Baker at 5:33 PM 1 comment:

Our little girl is all grown up! 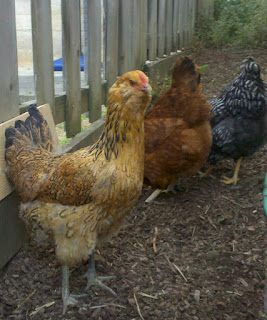 I was recently contemplating writing a post about how much Garuda has grown. She's much bigger now than when we first brought her home. This picture is not the best for scale, but she has really filled out! She is still a MASSIVE fraidy cat and at the bottom of the pecking order, but she is quick on her feet and definitely a survivor. Personally, I think she's the prettiest of the group. 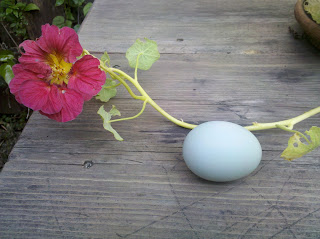 But today I have something much more exciting to share: a blue egg! Actually, it's a very pale blue-green to be specific. This Easter egg is just in time!
Posted by Mrs. Baker at 5:39 PM 2 comments: